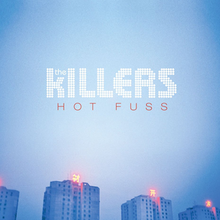 Back in 2004, The Killers released their debut album ‘Hot Fuss’ which included some amazing songs, one which we all know, “Mr. Brightside.” The year of 2004 was pretty great for music. There were releases by U2, The Used, Bowling for Soup, Taking Back Sunday, and many, many more. Songs that came out that year were some big hits. Even songs not in the alternative scene were quite big, no surprise there. But one of the songs that we love, “1985,” came out that year. Pretty awesome, huh? Well let’s actually talk about The Killers’ album now.

‘Hot Fuss’ includes 11 songs and is 45 minutes long. Most songs have little amount of lyrics, but they are spread out and fill the whole song. The album’s sound is similar all throughout. However, at the same time, each song unique on its own. Something that I did not catch were any curse words. That may not matter, but that is somewhat uncommon nowadays. Yes, this album is older, but people still tend to listen to it. I mean, it is amazing. Anyways, songs!

The album starts off with an interesting style with “Jenny Was A Friend Of Mine.” The beginning of this song has a good instrumental introduction to it. It is a great start to the whole album. The only thing that I did not like about this song was the ending, only because I am not a fan of songs with long endings with no lyrics. It’s a weird thing, I know. This may also sound strange, but the sound reminds me of something from a movie in outer space. Crazy!

“Mr. Brightside” is next. This song is so popular within this music scene that even Emo Nite plays it. It’s the song we all know and love. You can jump up and down to this song, scream out the lyrics, and it’s even great to sing to for karaoke.

The songs in general are groovy, “vibey,” and alternative. And by “vibey” I mean that you can definitely vibe and chill out to the songs on this album. I realized that “Somebody Told Me” is one that I actually know! I definitely recognized it right when it started. A very good song. My favorite one was “On Top,” though. The chorus is very fun to sing to. If you’re sitting down while listening to this particular one, you will most likely be moving around in your chair.

The longest song on the album is the last one, “Everything Will Be Alright.” A really nice beginning to it, “vibey,” a good way to say “goodbye” to listening to the album (for now, duh).

Overall the album is fantastic! It’s easygoing so you can listen to it when you are trying to be calm, but it does have some edge to it if you need to let out some emotions. You can listen to the album below and then comment what you think of it. I am sure you will not regret checking it out if you haven’t yet – it is an older album. Sit down, take a listen, and move around a bit. Don’t forget to yell out the lyrics to “Mr. Brightside.” You will thank me later.

Search for a Topic